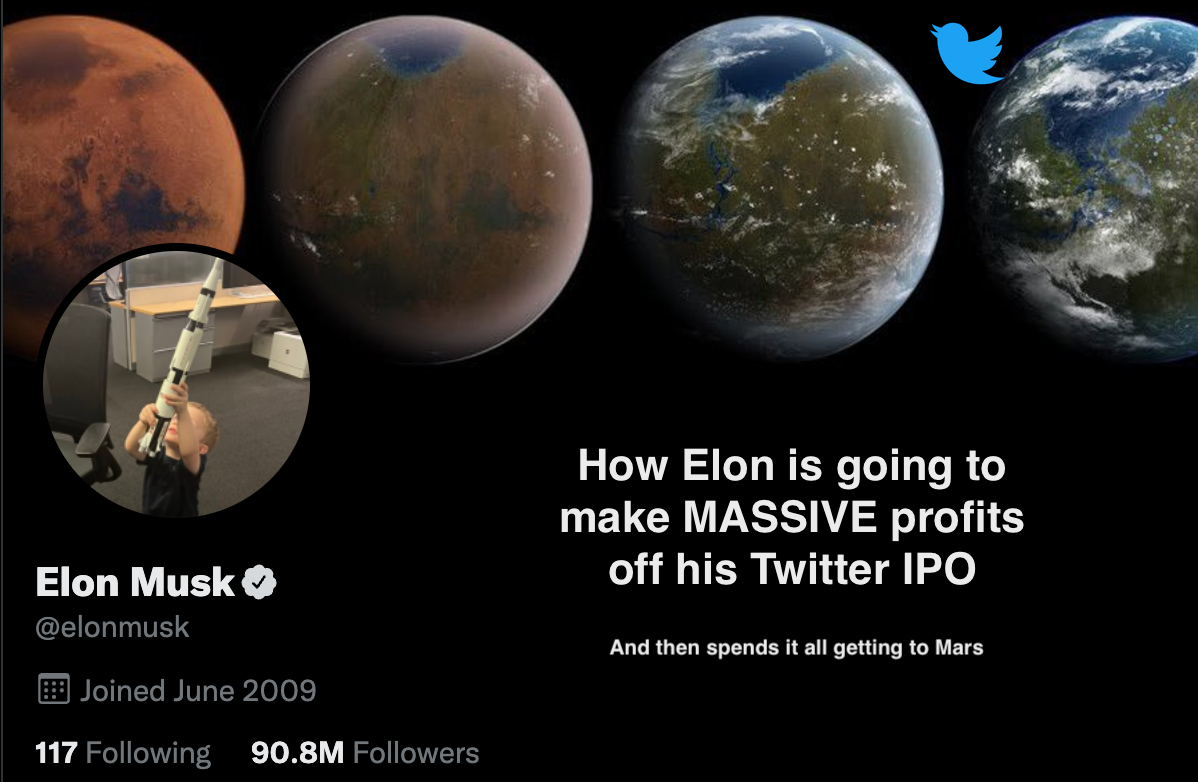 How Elon Musk and Turn a HUGE Profit on Twitter

Below are some of my thoughts and I will be adding to this list over time as I think of more. Elon can really, really improve Twitter, then IPO in 2-3 years for HUGE gains! And it wouldn’t be that hard!

Instead of having algorithms identify bots, create your own bots that will engage accounts and turning test them. You can train your Twitter Bots with Dojo. When the Twitter Bot identifies Spam Bots, it puts the account on time out for human review.

Advanced ability to search, filter, save, and analytics for a monthly subscription. You will have a dashboard that allows you to adjust or remove the below settings.

Become a member of your favorite Twitter personality and you will get rewarded with some cool features such as seeing the tweet before everybody else does. Starting off with $.99 per month per membership you can start getting perks, and that creators will receive 70%. These memberships can skill overtime and price and rewards.

Tipping and memberships will encourage people to build their influence and engagement. You provide the platform functionality and they will do the rest.

Just like I posted over here in SpaceX TV show concept, you can set up a competitor to PayPal that will not only allow payments from anywhere typically available, but also in crypto. You can tip and start memberships via this wallet. Somebody might pay via crypto, but receive a via cash. All the while you were making fees just like PayPal. Even if the wallet is not directly a part of Twitter, there can be profit sharing for transactions on the platform to bootst Twitter’s bottom line.

Allow me, as a user, to set ad preferences. This can be as easy as a series of multi select check boxes of “what are you interested in“.

Allow advertisers analytic insides based off of those metrics. Also allow the advertising AI to determine if that increases or decreases click through rate and adjust.

An artificial intelligence BOT that will gauge the accuracy of the continent of a tweet by verifying that tweets data with several websites. There needs to be an algorithm in place so the AI is not wasting time checking every single tweet. Perhaps a verify button that if enough people click the AI will be sent out to verify the tweet. Or if the tweet has certain topics which can pull from an internal accuracy database.

From verified false, to unsubstantiated, and verified true. Can even include leaning false, or leaning true. Also “verifying “ to viewers can see action is being taken. The AI will crawl different websites and verify the data and include a link to resources for the verification.

Since this is probably the biggest topic aside from Elon purchasing Twitter, I have to include my thoughts in this post.

I read some are suggesting this, however, I would not do this as it may reduce the number of people who wants to embed your tweets, thus reducing the importance of tweets and end Twitter as being the town square. But if you must do this, I would do it on a scale whereby you were only charging websites who embed many of your tweets. But again this may discourage that usage and diminish the platforms stance.

If you do charge, you may want to have your own embed software, where the tweet statistics are live within the embed. That is, as more likes, comment count increases, it will reflect on the embed. Users can choose the free version, or the live version. This may also help you determine if in fact you can charge for this service while giving you the ability to just drop the paid embed. Always best to increase features/functionality with paid, rather than decrease service if not paid.

Some are suggesting to open up the API for third-party apps, but API calls cost a lot of money, unless you’re charging those third-party apps. The bigger risk is some users will move off platform to these other services thus reducing your advertising revenue.

STAGE - IDEATION Concept draft. Much more ideation needed. Proofing needed. Not ready for review or distribution. Unidentified Aerial Phenomena The recent Pentagon declassification of UFO and UAP information to the public has created a huge buzz from outside groups...

END_OF_DOCUMENT_TOKEN_TO_BE_REPLACED

Nanoseas And The Coral Garden The Nanoseas is a children's book and tv show starring lovable tiny sea creatures on adventures. A group of very adventurous ‘kids’ and their sea turtle buddy,  Oliver, get themselves in and out of all sorts of trouble as they learn life...

END_OF_DOCUMENT_TOKEN_TO_BE_REPLACED

STAGE - IDEATION Concept draft. Much more ideation needed. Proofing needed. Not ready for review or distribution. Testing The Metal Life at Home Can be Harder Than in Theater A small town just outside a military base is home to active and retired military. This is a...

END_OF_DOCUMENT_TOKEN_TO_BE_REPLACED

STAGE - IDEATION Concept draft. Much more ideation needed. Proofing needed. Not ready for review or distribution. Response Time Seconds are Critical and Planning is Everything An elite special unit was formed out of necessity to combat an ever growing technically...

END_OF_DOCUMENT_TOKEN_TO_BE_REPLACED

STAGE - IDEATION Concept draft. Much more ideation needed. Proofing needed. Not ready for review or distribution. Frenemies Not Enemies but Never Friends Love is in the air. Well at least for Mike and Sarah it is. Two people who could not be more in love with each...

END_OF_DOCUMENT_TOKEN_TO_BE_REPLACED

SpaceX TV Show Not science fiction, science future!Objectives Elon continues his dominance into space and these chronicles are his forward facing record of struggle, ambition, accomplishment, and amazement of the frontier he is forging. Shaping the narrative of space...

END_OF_DOCUMENT_TOKEN_TO_BE_REPLACED

We use cookies to ensure that we give you the best experience on our website. If you continue to use this site we will assume that you are happy with it.Ok